Now that the first funding is secured from the Swiss Prototype Fund, it’s a good time to start a more detailed software analysis … so everyone knows what to develop. For that, I’ll take a step back and re-visit some of the assumptions, and also evaluate how to fit the software requirements with the development budget we have from Prototype Fund.

Software development is always quite some effort (and expensive!), so generally a piece of software should re-use as much existing work as reasonably possible, and should itself be re-usable by others and for other purposes. This is especially true for this software, as it is publicly funded and open source, so already geared towards re-use.

This brings us to a pragmatic approach to software architecture that has only two rules:

From our first call with the developers of the carbon coop platform, here is a short description of their own software architecture. The official name is “UNDP Online Platform for Voluntary Bilateral Cooperation under Article 6 of the Paris Agreement” and it consists of two parts as follows. Only the first part, the “main backend software”, is the one we would re-use:

With their “main backend app” selected as our base software, and after some smaller architecture decisions downstream, our software architecture now looks like this: 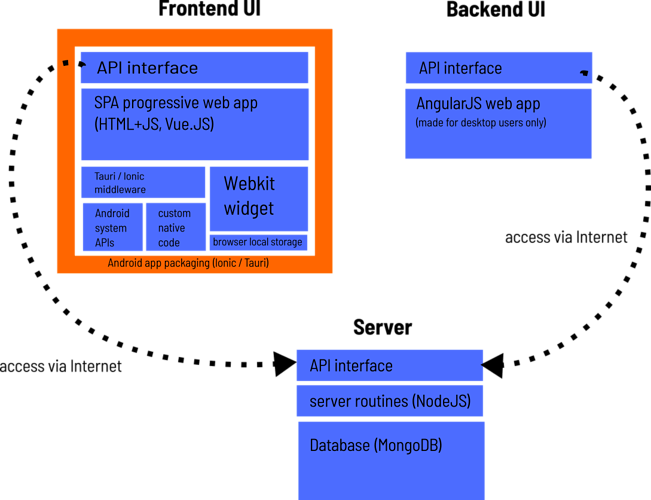 Some explanations and justifications:

Before settling on the architecture as described above, we also had considered various alternative starting points and architectures based on them, as follows:

Everyone @Coordinators, please provide your feedback and ideas in this discussion of the ClimateGains software architecture. I’ll edit the results into the wiki post at the start of this topic.

Just to be perfectly clear: I suggested the technologies based on “stuff I use”, not a deep analysis of suitability. Feel free to deviate from the proposal / improve if!

=> This should also answer 3): Nextcloud is only in there because I use it privately, other options are welcome. Having said that, I think they got fairly large funding from public sector entities, making me believe they will continue to exist and improve long term.

My opinion on two: I don’t think this needs to be part of the prototype necessarily.

Feel free to deviate from the proposal / improve it!

Thanks for the freedom to think about and re-think the tech aspects. I think it’s worth it … already just had one interesting new idea how it could all be done both fast and well (Ctrl + F “PayCoupons” in the wiki above). Just ideas for now, of course.

I’ve been flirting with PeerTube as an alternative to Nextcloud

That’s interesting, didn’t know it is based on BitTorrent. Will have a detailed look at PeerTube. Preliminary opinion though: server load is also not huge when all videos would be hosted right on the server, such as with NextCloud, and served from there. Because each of the videos will only get a few views (10-30?), not millions. The limiting resource is rather storage on the server, but that is relatively cheap and easy to extend, and even storage is not needed in crazy amounts when choosing resolution and compression adequately for the purpose of project documentation.

Just had the most productive online meeting in at least a year, with @OmaMorkie and the developers of the UNDP Online Platform for Voluntary Bilateral Cooperation under Article 6 of the Paris Agreement.

I have added my meeting notes about their carbon coop platform software to the wiki above, and also a new proposal there to choose that piece of software as the basis for ClimateGains. That’s my favourite architecture option right now!

We can now lobby governments that are buying emission offsets on the UNDP carbon coop platform to update their processes by using our custom mobile app for their project.

Being compatible with UNDP means being compatible with host-country government platforms. This also solves one major problem (double counting-claiming) that we can’t address ourselves (i.e. somebody pitching the same school video to two different donors through two different channels => Host country gov has a natural monopoly on keeping track of all climate actions).

Good one, added it to the wiki at the start of this topic now. I also added more documentation there about my proposal for a software architecture, including a little illustration and some notes on the tradeoffs implied in this achitecture.

@owen also agreed on that architecture in our call today. If I don’t hear anything to the contrary from you or @nadia, we’ll go forward with this architecture.

anything to the contrary

tempted to just stay silent in appoval, but as far as I can see that is all very reasonable. So from my that’s a big: